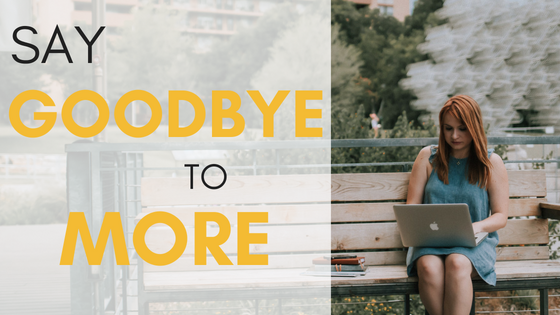 99% of all business advice tells you pretty much the same thing. That you should be doing more.

Here’s the truth about the whole “do more” thing. It’s total bullshit. And it’s unrealistic.

We know that the only difference between us and Oprah isn’t that she just sets her alarm for an hour earlier. It’s not that she just hustles harder. And yet so many entrepreneurs try to squeeze just a little more out of their excessively long 16-hour days, hoping that someday their businesses will be fantastic too.

And the worst part about the “do more” myth? Is that it’s precisely the thing that’s preventing you from scaling up your impact and income. You’re so busy trying to cram just one more thing into your day that you’re missing the big picture.

To your worst clients. The ones who aren’t paying you what you’re worth or aren’t putting in the effort or aren’t the right fit.

To the random marketing that you’re doing when you have no idea if it’s even working.

To constantly thinking you just need to take another course or join another mastermind.

To employees and contractors that you should have fired months ago.

To networking with people who will never actually help you get business.

To creating custom service packages for clients that you don’t even want to work with (hint: this is a big reason why so many service entrepreneurs never scale up their businesses).

To comparing yourself to peers, competitors or other entrepreneurs. We’re all at our own stages in our businesses and believe me, everyone has some kind of ugly shit going on behind the curtain.

To the idea that you can do it all on your own.

That’s why the first thing I do with my Council of Visionary Business Builder members is show them what they can start saying goodbye to in their businesses. Then I hold them to it.

Streamline, simplify and make room to scale. Because it’s one thing to say you’re going to say goodbye, and it’s another thing to actually do it. And doing it is the prerequisite to significantly growing your business.

And when you say goodbye to all the fluff in your business, you’ll be much clearer about who you serve what you’re good at.

When you try to do too much, the way you present yourself to the world is more frazzled and less steady.

You’ll work with anybody and everybody.

But as you narrow and do less, you’ll most likely refine what you’re truly great at and do more of it and less of the stuff that you had no business doing in the first place.

And how you look to the outside will reflect that.

Speaking of how you look on the outside, I’ve got a brand new shiny website. It rolled out last week. It reflects me pretty well today.

You can see it here.

I’ve been proud of all the previous versions. But this one feels the most grown up.

I’m also thrilled with the experience of working with the designer that put it together for me, who I’ve been working with on various things for about five years now.

I’ve relied on her for lots, although never bail money or therapy. Well, maybe a little therapy. 😉

If you’d like an introduction to her, either contact her directly here or just hit reply and I’ll make the intro.

She’s not cheap. The great ones never are.

Immense gratitude for sweet friends, for time to c

I’m a day late with #nationaldogday but let’s

When my ambition gets the best of me it typically

Dear Nature, You make me a better person. Do yo