Are You Letting Your Constraints Define You? 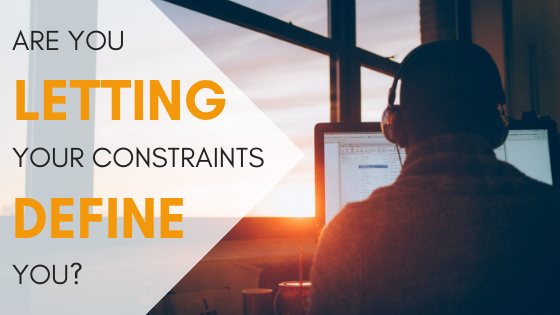 I got some shitty news earlier this year.

I was told that because I had started training too aggressively, I had injured my leg and that I would need to stop running completely for at least 20 weeks.

That’s TWENTY WEEKS of not doing something I loved! No early summer morning runs through my neighborhood. No runs through Forest Park. No runs along the river. No exercise in the form of running for almost half the year.

And while I realize this is a very first world problem, it seemed like a gut punch because I was planning to do at least four long-distance trail races and a couple of other fun running events in 2018.

Now I’ve been through recovery periods and injuries before but nothing this extensive or requiring this much time off.

When I got the news about abstaining from running, I felt so frustrated, so stuck. I was planning on being ‘MICHAEL, THE RUNNING WARRIOR’ not ‘Michael, the blob who can’t even do a chill 2-miler.’ I complained to pretty much anyone who would listen (read: my poor wife). I couldn’t let go of the fact that I had big plans and all my plans were now cancelled.

And then I had this BIG realization.

Your constraints are actually your benefits.

My clients are always telling me that they can’t do what their business really needs because of their very unique, very specific, oh-so-out-of-their-control situation. And I usually do my best to call bullshit while offering up a solid ‘Plan-B.’

There is always always always another (and usually better) way, and the ability to find that way in the middle of life stuff / medical events / cash flow crunches / my VA screwed up / my kid is home sick for a week, is what will make you successful. While everybody else is giving up because it seems like a dead-end or just plain “impossible”, you’re going to make it possible.

Within that situation of constraint is where we find the most creativity and the most commitment.

So instead of seeing my ‘no-running’ instructions as a death wish for my 2018 race plans, I began viewing this as an invitation from the universe…to try something new.

I told myself, HOLD THE PHONE! What else is possible now that I’m no longer tied to a demanding training schedule?

Well, I’ve often wondered about slowing down and starting every morning by being a little more intentional.

I’ve always wanted to have a little more time to listen to podcasts I love and not feel so rushed to fit in training runs.

Well, I was served up the perfect chance to get creative, to change things up, to potentially do something that is AMAZING. And all because I need to give running a rest for a few months!

Make the most of what you do have

My clients often tell me that they can’t experiment with a new service offering because they are so busy and their list is only 312 people and they can’t possibly change things up because they don’t have the time and resources without the profit from the new offer…you can see where this is headed. #stuckcity

They’re so focused on what they don’t have (time and a bigger list) that they have devalued what they do have (current clients to validate and sell to) and therefore have convinced themselves that there is no other option and they are completely stuck.

When we shift the focus to the clients that already love and trust us, then we begin to see all the possibilities unfold… an opportunity to reach out to past clients, get their feedback on a new idea, and maybe they’re even ready to re-engage with us.

Now we’re operating in the reality of possibility and we’re also forced to get creative. When we’re convinced that we need 2000 new prospects on our list in order to make money, it’s an easy way out. We tell ourselves that we don’t need to do anything today because there’s nothing we can do until we have 2000 new people on our list.

Sure, you might make more money with 2000 new people on your list. But in the meantime, you’re going to make NO money if you sit paralyzed, waiting for that day to come. What you CAN do is make SOME money right now. Using exactly what you already have.

When I dug into the feeling that I was being “forced” to give up running and that I was “helpless” to do anything about it, what I actually saw was that I had choices and those choices were allowing me to get more creative:

When I reframed it like that, it suddenly seemed like the most natural and positive thing in the world to give running a break. In fact, the opposite (what I had been wishing for) seemed like the real problem: to keep doing the same thing over and over and possibly jeopardizing my long-term health and well-being. I realized that I value sustainable health and vitality over near-term, ego driven, desires.

This is true for you, too. If you are willing to look closely. Maybe you don’t have the luxury of saying “no” to bad clients because you need the money. Or maybe you can’t narrow your niche because it feels too limiting. Or maybe you can’t afford to take any time away from your business because you try and do everything yourself. However you’re choosing to show up in business and in life, it’s a reflection of your choices and your priorities, and that’s okay. In fact, it’s really wonderful because it’s what forces us into a new way of thinking and being.

Alright, I need to wrap this up because I’ve got a short run to do!

That’s right. I’m back to running again and I’m excited about it, and a little scared about it…because what if I injure myself again? But I know that if I have to slow down, I won’t let my constraints crush me. I will only let them challenge me to be even more creative.