WARNING: This is one of my more opinionated posts. Dare I say there is even a rant or two. You can’t say I didn’t warn you!

Today I will challenge a few ideas about some of the most established institutions in our Western culture. Specifically, the institutions of finance, higher education, employment and government.

If there’s one thing for certain it’s change. Change happens whether we like it or not. And often  it’s how well we adapt to change that determines our level of success and happiness.

Today, I am going to discuss some of the changes that are happening and why it makes sense to simplify and start a side business that may eventually replace your job as your primary source of income and stability.

While society tells us that we’re supposed to borrow money to go to school and buy a house, student loan and mortgage debt can bind you to a biweekly paycheck to remain afloat financially.

When you’re paying $2,500 per month combined on your mortgage and student loans, it makes it hard to take some time off to explore a passion or build a business. You have to keep running on the hamster wheel just to stay afloat financially.

Which begs the question, is college even a good option anymore? As Michael Ellsberg points out in his book, ‘The Education of Millionaires’, why not take the money and time you would have spent on school and build a business? This comes from an Ivy League graduate.

Ditto for buying a house, which anchors you to a specific geographic location, limiting your employment opportunities to that area.

You probably won’t hear this from anyone else, but the primary factor which determines how much you spend every month is the house and neighborhood you live in. That’s because your neighborhood creates the financial culture that often dictates the spending choices you make.

I know people that live in $500,000 homes in beautiful neighborhoods, drive new BMW’s and Audi’s, buy giant flat screen TV’s and $6,000 sofas, and are essentially broke. They don’t fully realize how much money they are spending because everyone around them is doing the same thing.

If your dream is to really live rich (i.e. decrease your workload and have more time to pursue your passions) why not consider moving to a less expensive house in a less expensive neighborhood and drastically reduce your expenses?

Then you wouldn’t have as much financial pressure to keep that demanding corporate job that sucks all your time and energy away from the things you really want to be doing.

At the same time you could also be starting a business on the side and increasing your income. By significantly cutting your biggest expense by 30% to 50% and at the same time, taking immediate steps to increase your income 20% – 50%, you can escape financial slavery and have more room to pursue all the things that really matter to you.

These burdens of lifestyle expenses prevent most people from reaching one of the most rewarding positions in life: working for yourself, where your earning power can be a direct result of your ideas, drive, and effort, rather than your boss’ estimation of how much your time is worth.

I don’t know about you, but I want to be free from the shackles of a 9-5 prison and someone else determining my worth.

And I want to be more in control of my own destiny. I’m tired of being fed lies about what I’m supposed to do and how I’m supposed to live. The government and the media have mastered the craft of telling us how we should be living and what we should be buying in order to ‘fit in’ and be ‘successful’.

Nine Reasons To Start Your Own Business On The Side

1) The average cubicle dweller is becoming impoverished. Let’s start by taking a look at a simple graphic: your income is going down. Simple as that! Median U.S. household income is near its lowest point over the last 13 years.

This is a disturbing trend (read change) that likely won’t turn around anytime soon. So what are you going to do about it? 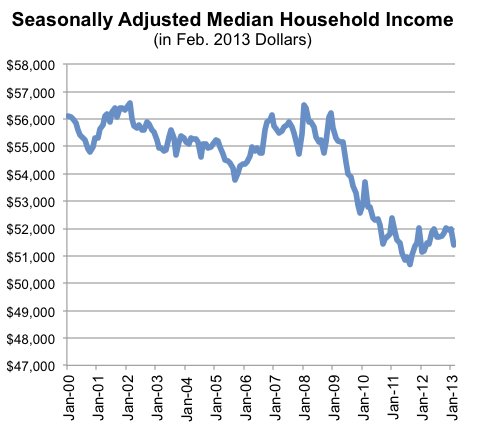 2) The middle class is being squeezed. Population is going up, but high-quality jobs are being outsourced, globalized and mobilized.

I work for a company that has constantly downsized their workforce since I’ve been here. What they do every quarter is replace some of the full time workers with temporary staff so that they don’t have to pay benefits full-time benefits to as many employees. It started with the IT department, then in Software Development, then in Marketing. What’s next?

The workers that are left (that’s me) are asked to do more for the same amount of pay. And we’re told that we are the lucky ones because we still have a ‘good job’.

And taxes keep going up. I don’t mind paying my fair share to support our clean water, infrastructure and other things that make life easier. But I’m not too keen on paying higher taxes to a degenerate government that has to borrow more money simply to pay interest on the money they’ve already borrowed.

And just in case you hadn’t connected the dots, having your own business means that you can deduct legitimate business expenses pre-tax.

3) You’ve sold out. Unless you are completely satisfied with your job and it gives you every aspect of happiness and success, you are selling your Soul in exchange for some temporary level of comfort.

Your unwillingness to do something that really matters is nothing more than simple bribery. It’s an illusion of comfort and security. The steady paycheck, the cool BMW 3-series, the rocking 2-bedroom loft in the cool part of town…these things are holding you hostage.

If material accoutrements are all you need to give up on your dreams, you don’t have a chance at your best life because your dreams are not your biggest priority – your immediate comfort and security are.

In other words, you’ve sold out!

And I get it. I’m still working in a corporate job. But I’m leveraging it to build a business on the side that will allow me to step away and not have to put my Soul through the corporate meat grinder five days a week.

4) Your retirement plan is a joke. First off, everybody under the age of 50 should just say goodbye to eventual Social Security. Don’t count on it. Never mind that you have been paying into it your entire adult working life.

And for those age 65 and above, a promise has been made to them all of their lives. Well, unfortunately the promise is a lie.

Social Security gets adjusted according to the Consumer Price Index (CPI), which excludes food and energy. Guess what: food and energy are going up faster than the CPI… which is why current retirees have about ten years left before their basic needs can no longer be met by the money promised them all of their lives.

Nobody can retire anymore on their retirement plan. It’s sad but true: humans are just living longer. 401ks, IRAs, and the other little plans your corporate masters and bank liars have put together for you are built on lies and ways for them to earn fees on their mutual funds. They use fancy phrases like “the stock market has never had a sustained down period.” All of these things are lies.

Here’s the truth: you will never become wealthy and free investing a small portion of your income in your 401k and mutual funds. It’s just not going to happen.

All of the people that I know who make significant incomes through investments have created their initial wealth by starting and growing their own businesses.

There are multitudes of research that indicate the the most common way to generate a combination of personal satisfaction and wealth is to start a business and create real value for people.

Don’t believe the lie you’ve been told about becoming wealthy by scrimping and saving for 40 years and maxing out your 401k plan. Ask many of the baby boomers how that worked out in 2000, 2007, 2008 and 2010 when many people had their 401k’s demolished by market crashes.

The path of pursuing meaningful work is not easy. It’s going to take a lot of courage, diligence, sacrifice and patience. You will have to be around positive people who love you. You will have to be grateful for the abundance in your life and look for creative ways to have more of it.

This is not economics. This is the real world and how to survive in it. Not the fantasy land of cubicles and fluorescent lights.

Remember, nothing great happens all at once. Permanent change occurs through process – hundreds of decisions made over time that engineer a lifestyle.

I will begin interviewing remarkable entrepreneurs next month on how to engineer success on your terms while keeping your sanity (mostly) intact. 🙂

And I will return next week with the other five reasons to start your own business on the side.

Until then, start thinking about the kind of life that you really want to have and start taking steps to make it a reality.

P.S. Do me a favor and let me know what you think in the comments.

Immense gratitude for sweet friends, for time to c

I’m a day late with #nationaldogday but let’s

When my ambition gets the best of me it typically

Dear Nature, You make me a better person. Do yo